skip to main | skip to sidebar

Here's the CD that sums up the year. I got some flak for seeming too negative (this happened in 2007, too). So here's the inspiration behind the choices.

1. Secondhand News / Fleetwood Mac - If you weren't at SLC Baccanalia in 1999 to see the world's best FM cover band, well this choice probably makes no sense to you. If you were..? 2009 was not only the anniversary of Woodstock, people!

2. The Rising / Bruce Springsteen - The inauguration and the We Are One HBO concert. It was great and if you didn't see it you can only hope HBO does something with the license to all those great performances.

3. Midnight Train to Georgia / Gladys Knight - Sometimes you gotta choose: "if you'd rather live in his world, or live without him, in yours..."

4. Wild Wild Life / Talking Heads - Because I made it up to Seattle and got to renew an old friendship, thus leading to many, many, happy phone conversations.

5. Nobody Right, Nobody Wrong / Michael Franti and Spearhead - The feel good song of the summer might have been their hit, but this song is just fabulous.

6. Perfect Timing / Drive-by Truckers - It is like Dinosaur Jr., Neil Young, and Steve Earle mushed into one sound. Love it and had to put something on this year's playlist. "here I am again...perfect timing..."

7.Casino Queen / Wilco - Simple. Show at The Joint in Vegas. Played this song, just for me.

8. Like a Rolling Stone / Bob Dylan - Simple. Show at The Joint in Vegas. Played this song, like it had never been played before.

9. Different Drum / Susanna Hoffs and Matthew Sweet - Because I randomly found their cover albums and they are like candy.

10. Helpless / Neil Young and The Band - Because of The Last Waltz. What else can I say? Go watch it again.

11. Sheena is a Punk Rocker / Ramones - Everyone needs to be schooled by Joey Ramones every once in a while. In 2009, I needed it.

15. Take Me Home Country Roads / Jason and the Scorchers - The crazy cover song slot. I have been way into John Denver in the last half of 2009.

16. Kick Drum Heart / Avett Brothers - Added this one because it's happy and upbeat and I love the Avett boys.

17. True Love Will Never Fade / Mark Knopfler - A sweet cinematic song, lovely and a nice message to end the year with.

Posted by zenhikers at 3:33 PM 0 comments

Merry Christmas and Best Wishes for a very Happy New Year. If you are so inclined, read our online holiday card and let us know what you have been up to!

Posted by zenhikers at 2:35 PM 0 comments

Everybody Knows This is Nowhere

Neon sign Fremont East
Originally uploaded by zenhikers
November. Friends, family, and food. A good month, and lots to be thankful for, despite the melancholy that comes with confronting another year's passing in Las Vegas.

Early in the month, I did something completely out of character and had a girl's weekend in Vegas with some old friends from high school. This actually involved things like walking up and down the Strip, eating at celebrity chef restaurants, nickel slots, shopping,and one Michael Jackson dance party (um, yeah I was responsible for that last one.) It was a fabulous time and I just want to note here that I am capable of "being fun", wearing makeup AND a dress simultaneously, and doing "girly stuff". Yeah, I know you doubted me, but that's cool.

Later in the month, we had the in-laws in town and got to spend some quality time catching up. This weekend was full of eating yummy food (complete with Italian accordion players), walking the dog, talk about real estate, love at Love, and a few winning hands of video poker on Fremont Street. It is fun to see the city through the eyes of a tourist and putting together an agenda for the weekend was really fun. I'll definitely be back to Firefly at the Plaza, Twin Creeks at the Silverton, and just for shock value the Hash House (kill the DJ, though!!)

Most recently was the highly tradition-wrought holiday of Thanksgiving. After seventeen heated conversations about methodology and best practices for brining a turkey - we finally got our bird prepped, the fridge packed with groceries and beer, and the iPod queued up with some good cooking music (somehow this became a classic rock-themed meal). My sister and her husband arrived on Thursday and we kept them distracted with learning how to play cribbage as we cooked and baked. I also surprised my sister with a toast to her recent academic accomplishments and I think she was extremely happy to have surpassed a major landmark in her career. I am very proud! Because no family visit is complete without a little sibling rivalry we also ended up playing (what is now a tradition, I suppose) a poker tournament that naturally I ended up losing all my money in (darn lucky river card!). The rest of the weekend involved more football than I ever need in my life, but I did learn about the Florida Gator chomp (?) and some shot called Sex with an Alligator. I'm positive this will come in handy! During an escape from the Mandalay Bay sportsbook, my sister and I snuck away to see the Bodies exhibit which has forever changed me. I mean you are really missing out in life if you cannot immediately conjure a mental image of the complete human skin lying in a glass box. Now, this is burned eternally into my memory. Yeah, totally.

So, now it's officially holiday season. I'm very happy to have had such fun in November and I sincerely thank everyone for coming and spending some time with us in Vegas. But, I have to say a mellow Christmas doesn't sound half bad. So there's the update, just in case you were "wondering what it's like down here". Hope you all had a lovely Thanksgiving. Cheers!

Posted by zenhikers at 9:19 PM 1 comments

All You Can Eat

This is a Flickr badge showing public photos from zenhikers. Make your own badge here.

Ooh Las Vegas..."ain"t no place for a poor boy"

The Story of Stuff 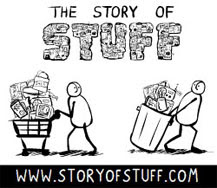